Were you recently charged with unlawfully carrying a concealed gun in Columbus, OH?

Stand up and fight – make it hard for the prosecution to convict you and send you to prison. You can do that by reaching out to a skilled Columbus carrying a concealed weapon attorney from Koenig & Owen, LLC.

Why Koenig & Owen, LLC Should Be Your First Call After a Weapons-Related Arrest in Columbus 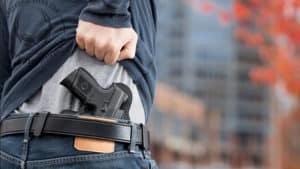 The consequences of a weapons-related criminal conviction can be devastating. Fortunately, you have the right to defend yourself. Hiring an attorney can make a huge difference in how your case unfolds.

At Koenig & Owen, LLC, our experienced Columbus criminal defense attorneys have decades defending clients against charges just like yours. We’re ready to put our experience and knowledge to work for you.

If you hire us to defend you against your weapons charge, we will:

Do you want to have an experienced criminal defense lawyer from Koenig & Owen, LLC, help you fight back against your gun charge? If so, please do not hesitate to give us a call and schedule a free initial consultation at our law office in Columbus, Ohio. Our law firm knows how to handle cases like these, and is ready to go to battle for you.

The Second Amendment to the United States Constitution protects the right of every American to keep and bear arms. However, these rights are not unlimited. The state of Ohio has a range of laws on its books that regulate how and where its citizens can carry their guns.

Commonly charged concealed carry offenses in the Buckeye State include:

Section 2923.12 of the Ohio Revised Code explains that it is unlawful for an individual who does not have a concealed handgun license to conceal on their person any of the following:

When police officers catch someone violating this statute, they can charge them with illegally carrying concealed weapons.

The state of Ohio almost always classifies this criminal offense as a misdemeanor of the first degree. However, prosecutors may choose to upgrade it to a fourth-degree felony if the weapon is loaded.

Carrying a Concealed Weapon in a Prohibited Location

Section 2923.126 of the Ohio Revised Code states that it is unlawful for gun owners to bring their firearm into any of the following places – even if they have a concealed carry permit:

Should law enforcement officers find someone violating this statute, they may take them into custody and charge them with breaking the terms of their license.

Ohio usually classifies violations of this law as misdemeanors of the first or fourth degree – depending on the circumstances surrounding the infraction.

Section 2923.16 of the Ohio Revised Code explains that it is unlawful for a person with a license to carry concealed weapons to do any of the following things during a traffic stop:

When Ohioans violate this statute, law enforcement can arrest them and charge them with improperly handling firearms in a vehicle.

The Buckeye State typically classifies this offense as a felony of the fifth degree or a misdemeanor of the first degree.

The seasoned criminal defense lawyers at Koenig & Owen, LLC, have a comprehensive understanding of Ohio’s many weapons laws. So, if law enforcement officers in Columbus recently charged you with one of the crimes outlined above, please do not hesitate to give us a call. We offer free consultations.

When the Buckeye State convicts its residents of offenses involving deadly weapons, it usually sends them to jail or prison and doles out a hefty fine. The specific nature of their punishment depends on the seriousness of their criminal offense:

Of course, fines and imprisonment are not the only consequences an individual can face when the state convicts them of illegally carrying a concealed weapon. They will also get a permanent criminal record.

As a result of a criminal record, they are all but certain to face a variety of collateral consequences, such as:

Offenders must typically ensure these consequences for the rest of their lives – unless they can get their record sealed.

Do you need a knowledgeable criminal defense attorney to help you fight to avoid the negative consequences of a gun crime conviction? Then please get in touch with Koenig & Owen, LLC, today. Our team has been handling cases like yours for years and would be happy to assist you in any way we can.

Defenses Against Concealed Carry Charges in the State of Ohio

When Ohio residents get arrested for illegally carrying a concealed weapon, they often believe that it is just a matter of time before the state sends them to jail or prison. In reality, however, with the aid of an effective defense strategy, they can frequently get their charges dismissed or reduced.

A brief list of some of the most often used defenses against crimes like these would include:

The Fourth Amendment to the United States Constitution grants the residents of Columbus the right to avoid unreasonable searches and seizures. If an attorney can prove that law enforcement officers only discovered their client’s firearm because of an unlawful search, they can often get their charge dismissed or reduced.

Unfortunately, it is not at all unusual for police officers in the state of Ohio to charge people with unlawfully carrying a concealed weapon without checking to see if they have a valid permit. When attorneys present their client’s license to the court, they can typically get their case dismissed in a matter of minutes.

If a defense lawyer can prove that a law enforcement officer forced their client to break the law, they can almost always get their charge thrown out. To use this strategy, however, the attorney must have a lot of evidence against the officer in question.

At Koenig & Owen, LLC, we have been helping Ohio residents devise effective defense strategies for years. As such, we know which ones work and which ones do not. If you would like to have us defend you against your carrying a concealed weapon charge, all you have to do is pick up the phone and give us a call.

Your Skilled Carrying a Concealed Weapon Attorney in Columbus

When the residents of Columbus need an attorney to help them fight back against their weapons charges, they know they can always rely on the team at Koenig & Owen, LLC. We have been working on these types of cases for years – securing countless favorable outcomes for our clients along the way. Reach out to us today if you would like to have us stand up for you.